Live from Ashmore in August

Thanks so much for your hospitality.  Ashmore team member Wayne showcased the top ten in-store hot items for Father’s Day gift ideas to help us all out with our present purchasing, one of the best skippers in the business, Gav from Sea Probe charters joined us to give us some tips on gear and rigging and Dave Salerno geared up and shared his wealth of knowledge on kayak fishing.  With the Flathead Classic just around the corner Bruce Anderson joined us and chatted all things classic along with sharing some tips on flathead fishing and what lures and gear to use. Johan Hasser from Outdoor X gave out tickets to everyone in the crowd for the exciting inaugural Outdoor X show being held in September at Sanctuary Cove and Paul showcased Anacondas range of filleting knives, what to look for when choosing a fillet knife and filleted up a Jew fish showing us all the best way to do it ensuring you get the most out of your fillets.

There were so many giveaways from our new Step Outside hats, Anaconda gift cards, fishing measure mats aka brag mat, a rod and reel set and lures along with the super talented coriander loving Matt Cornell rocking the Live Show with his tunes.  Although he’ll never have a career in stand up comedy we always love having Matt with us!

Special mention goes out to the hard working donut food truck out the front….thanks Con for the hot cinnamon donuts after the show, they went down a treat!

Big thank you to everyone who made the trip out to come and join us on the night, we hope you enjoyed yourselves, learnt something and took home a bargain.

If you weren’t able to make it, you can always check out Anaconda’s Facebook Page as the Live Show is available to watch there. 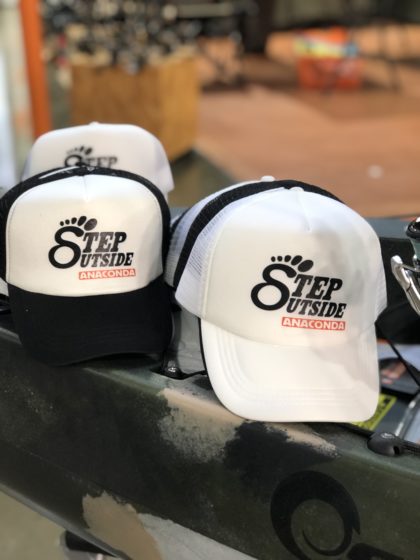 Our new Step Outside Anaconda hats 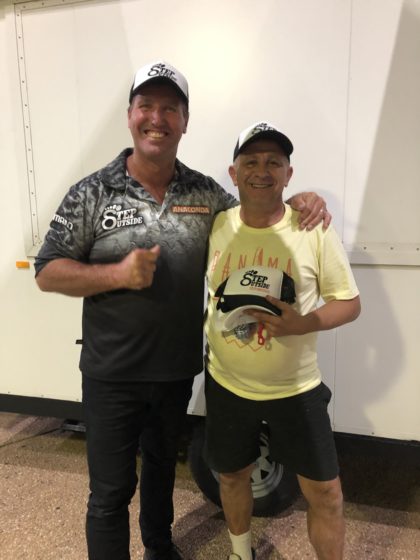 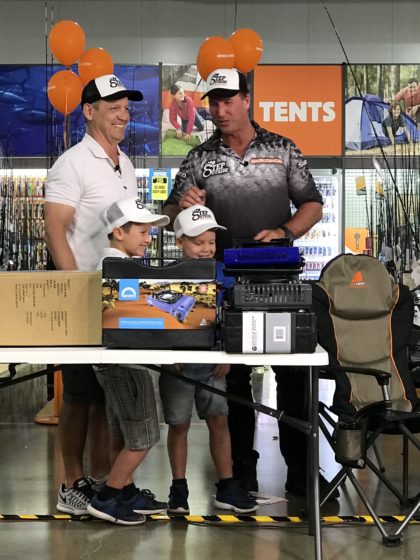 Johan Hasser from Outdoor X and his boys 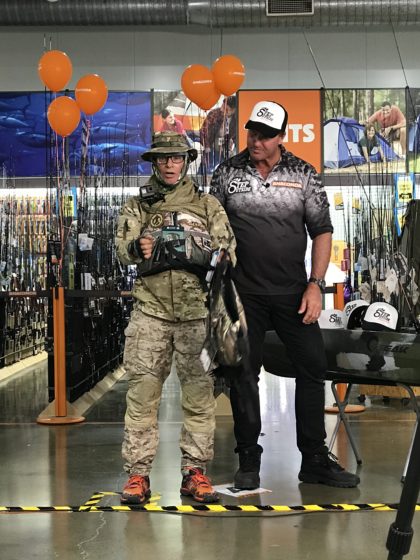 Dave Salerno geared up with his expertise 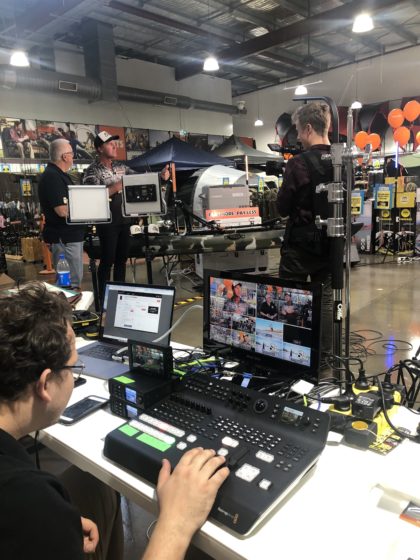 Jack Kelly working his magic behind the scenes 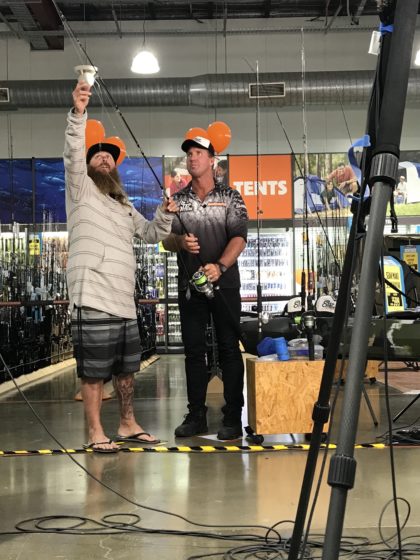 After spending a few days filming around Tasmania for our weekly Step Outside with Paul Burt show prior to the Saturday night in-store Live Show, we had the absolute pleasure of meeting some amazing locals who taught us a thing or two with their wealth of knowledge and humbly gave us their time to join us for the Live Edition.

We had the honour of indulging in one of Tasmania’s finest delicacy’s according to our team; Barilla Bay oysters thanks to Justin Gok from Barilla Bay and one of our braver in store guests tackled the four year old oyster weighing in at just under one kilo and won a voucher to spend at Anaconda for his efforts.

Anaconda Cambridge Team Manager Scott gave us a run down on the current winter range in store from Mountain Designs to keep us toasty and comfortable, Ashley Hallam aka “Squid” from Tasmanian Wild Seafood Adventures chatted to us about Cephalopods or better know to you and I as calamari,  Anaconda Team Member Anthony joined us to talk about catching Blue Eye on Shimano’s Electric Reels and we gave away Anaconda vouchers to some of our very enthusiatic audience members who definitely were deservant with their loudest ANACONDA screams.

Big congratulations to Patrick for winning the nights biggest prize….the $500 Anaconda Gift Certificate!  We know he’ll have a ball spending that.  Huge thank you to everyone who came along on a very chilly night to join us and we hope to see you all again soon!

Thanks for having us Cambridge. 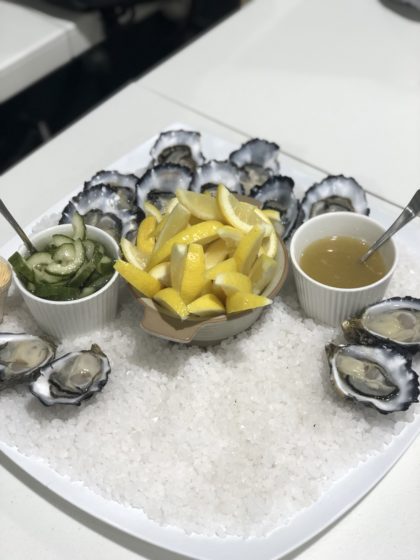 The Barilla Bay oysters were sensational!! 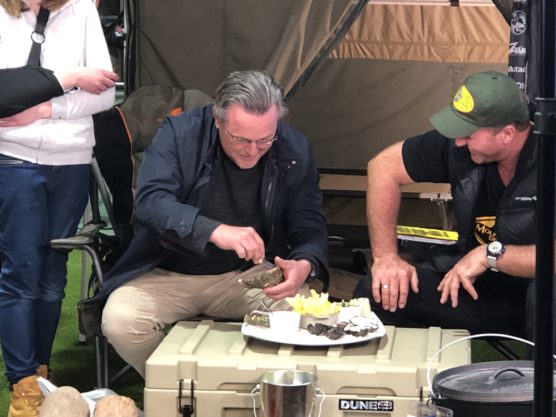 Big thanks to Justin Gok from Barilla Bay for coming along and educating us all on oysters.  We headed out to Barilla Bay on our travels and it was definitely educational. 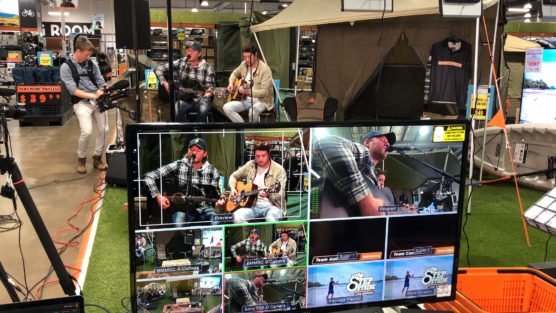 The Tom Coulson Band were absolutely fantastic and all round top blokes!  If you missed them, head to their Facebook page to hear their music as they were a huge hit on the night. 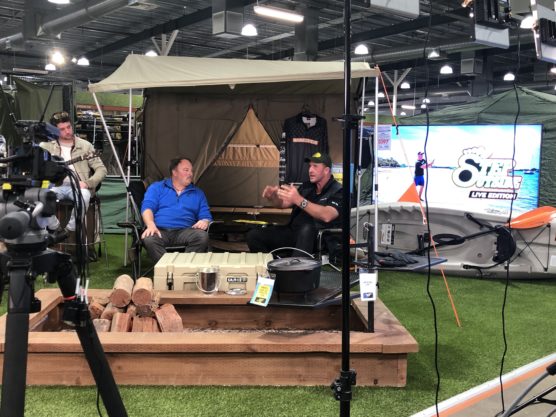 “Squid” from Tasmanian Wild Seafood Adventures comes highly recommended from us as the man to go out fishing with if you’re looking for an amazing day out on the water. 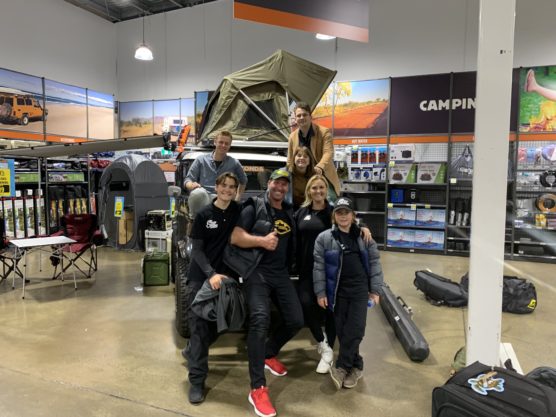 Big thanks to our crew, especially the lovely Brie and Jack who got married at Cradle Mountain only a few days prior to our Live Show Edition! Thanks for spending your honeymoon with us….you guys are the best! 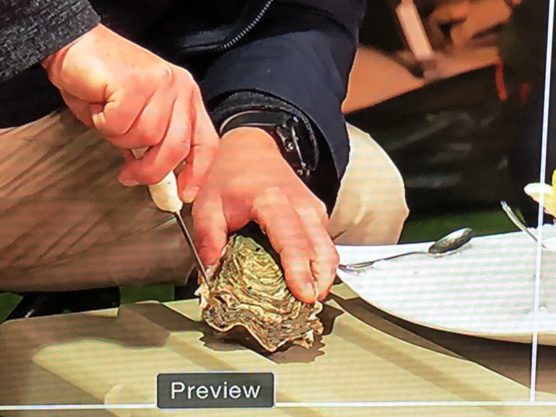 The four year old oyster that one of our brave guests managed to consume in two bites!!! Sir…we take our hats off to you.

Everyone’s new best friend, the lovely Jason, from the Sands at Coolangatta was on hand to make not only our on stage guests phenomenal “welcome cocktails” but showcased his bar skills with a few cocktail demonstrations for us all to attempt to replicate at home.

SCIBS stage host regular “Gooey” was brave enough to co-host with Paul and kept our cooking challenge running at a competitive pace….Team Canada vs Team Anaconda Australia went head to head with a prawn mystery box challenge followed by an oyster challenge.  Both teams whipped up amazing food with Bondi Blue Vodka the key ingredient in both their dishes.

Although we did feel Team Canada’s dishes looked, smelt and tasted beyond AMAZING they were out voted by an Aussie bias crowd with Team Anaconda Australia and their very interesting crocodile oven mitts pipping them at the post on both dishes.  Everyone in the crowd received a FREE Anaconda Fishing Shirt voucher and our on stage guests who participated in our life jacket challenge along with cocktail making assistance and casting challenge contestants took home some brilliant Anaconda prizes like gift cards, Shimano combos, Coleman burners and loads more including Bondi Blue Vodka!

END_OF_DOCUMENT_TOKEN_TO_BE_REPLACED 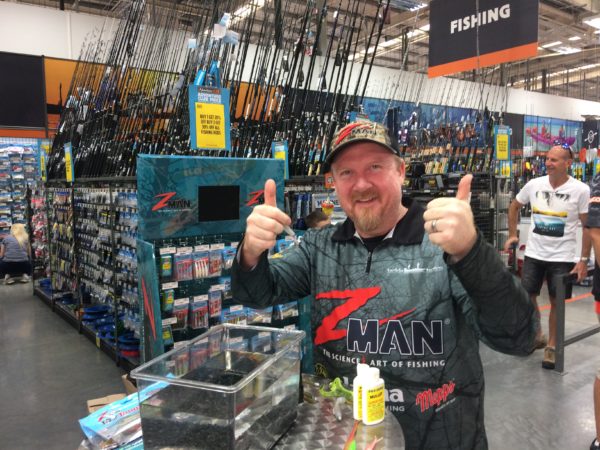 Thanks to Zman for coming to chat about rigging soft plastics & types to use for different species.

During the show Matt treated us to some of his original work, we talked snorkelling, Anaconda’s very own Clint Grace gave us the run down on camping tents and essentials, some of our audience members got their hands smelly, learning the art of baiting up a beach worm and the VMR Brisbane boys cooked up a storm out the front on the BBQ. 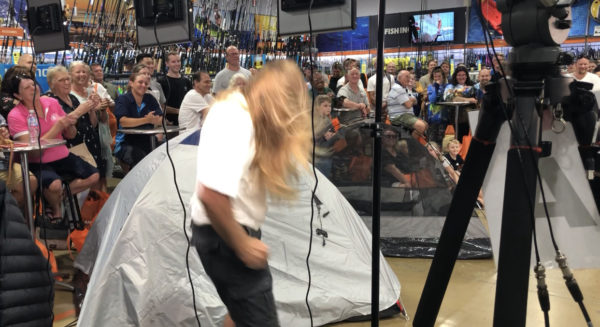 Matt’s Cornell’s “unofficial back up dancer”

We learned how to fish from a SUP, tested the Shimano Quick Fire combo, talked Cast Nets with the boys from Pro Throw and had some amazing JB Caravans on display for our Live Show guests to get up close and personal with.

We were very tempted to hook one up to the back of our vehicle and drive it home….these caravans were amazing!  Overall this was a fantastic night and we’d like to say a huge thank you to everyone who came out to support us. 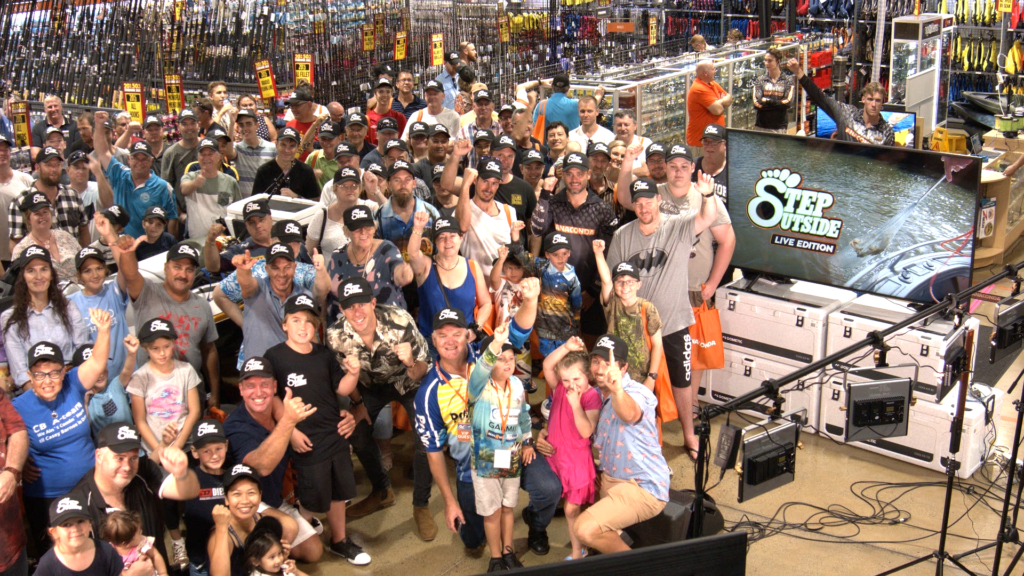 It was amazing to see a sea of Step Outside Hats at our first LIVE SHOW!